We are delighted to announce that Clever Man Atractor Beer is now available in Pettitt’s SuperValu, St. Aidan’s Shopping Centre, Wexford. We are thrilled to be partnered with a shop that supports local producers. Stop in and satisfy your curiosity! Always Be Curious! 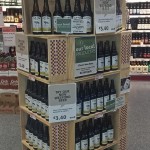